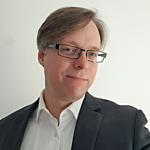 After doing my previous BB8 render, I got an itch to try to turn it into a short animation. This is the first animation I have ever made. Except for some obviously glaring mistakes, that I didn't realize until after rendering (floating in the air for a keyframe here and there, or head being detached from the body which fortunately can't really been seen from the camera angle), I'm quite happy with it. Oh yes, I added some sound effects, just to try it out. So I was able to get some experience with that as well.

I used the CrowdRender addon, which can be found at: www. crowd-render.com. This allows you to connect multiple computers. It's still in early development, but if you have a bunch of computers at home, you can easily connect all of them to minimize the time it takes to render. And it's free!