back My Castle in the clouds 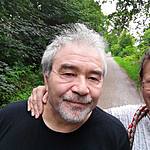 My "cloud" castle is ready yo yo 🙂 It was really fun, there are a lot of elements built in that I learned at CG Cookies and that really brought me many steps forward. Just a simple thought The Lego system. Even elements that do not seem to have a common interface, such as straight walls and round arches, can be constructed in such a way that they can be connected to one another without further effort.
Farmers have settled at the foot of the castle and it has emerged in a small village.
The castle / palace was created on the basis of 6 elements, 4 arches and 2 straight lines, different heights. OK; the towers are of course excluded. They were created individually, although many more were created using copy / paste.
The torches on the front and on the side are actually animated, but if I let the animation run the frame rate would crash into the basement, at around 3 frames / second.