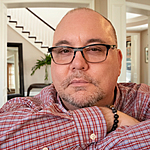 So, the other day I thought I would follow the video "Introduction to Hard Surface Modeling." I watched the tutorial trailer and immediately noticed that an older version of Blender was being used by the Instructor, but I thought it wouldn't be an issue. Unfortunately, it was. I hit a wall 25 minutes into the video because the menus and buttons and the instructions weren't matching what I was seeing in my version of Blender. I spent a lot of time searching around, and I got different results. Frustrated, I put it away...

I am pretty knew to Blender. My first download was version 2.79, but I quickly jumped to 2.83 and have been using 2.8.3.0 every since. So, to be clear, I realize there were once earlier versions of Blender, and I also realize that CG Cookie has been around for a while, which is why a lot of the tutorial videos feature older versions of Blender.  Got it.

But what does one do when they're trying to follow a tutorial and can't because they're using a newer version of Blender? I assume CGC is working diligently to replace older videos - especially popular ones - using updated software, and now with 2.9 having launched, I am certain that CGC is fighting to keep up. It must be one heck of a job.

So, does anyone out there have any thoughts or advice? I was really bummed that I couldn't take the Hard Surface Modeling course.  So, either it's me, i.e., I haven't attained an intermediate skill level yet, or it's just that hard to follow using a different interface.

I appreciate any advice given. Thanks!