back Jump to Answers 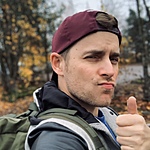 This is my second Blender tutorial. I did the launch pad rocket thing.

This IS NOT for beginners. Way too much stuff way too fast.