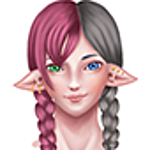 Some may know that my overall goal is to create a small game on my own.  So I decided to follow Mirandas lead and created this topic as some kind of documentary for my progress and ideas! :)