Rack Focus - Folgers Can of Money

This is an exercise submission on the exercise Rack Focus

This submission has passed!

Exercises are a great way to test what you've learned given certain restraints, while getting feedback from your peers. Plus, they're a lot of fun! 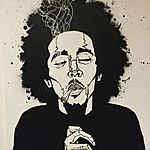 Chad Brandon (sos-money)
I attempted to create a full scene for this exercise.  Just wanted to have fun and be weird.  "Folgers can of money" is a line from a scene on King of the Hill; the episode where Hank has to be Dale for a day, while Dale donates his kidney to John Force. Really funny episode.

The character and the gun were downloaded.  I modeled and textured the rest of the objects.  HDRI for the lighting.

Had fun working on this exercise!