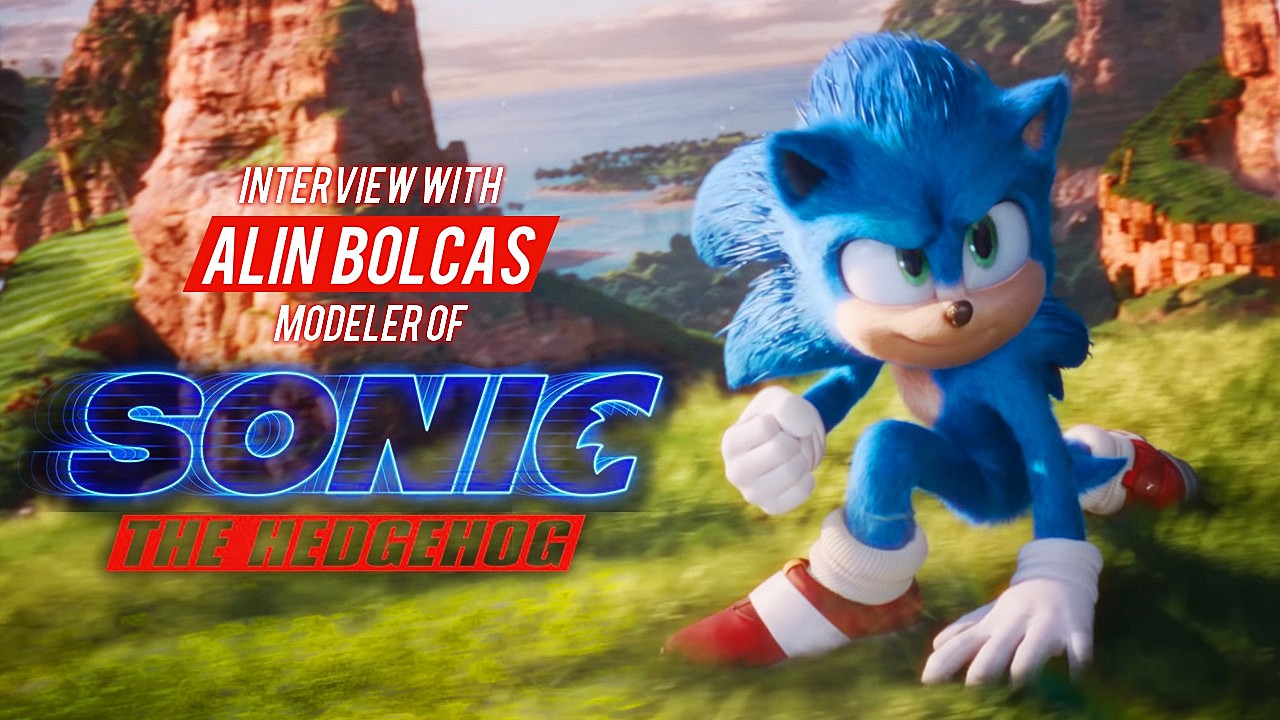 Recently I was browsing 3D art on the interwebs  when I noticed the modeler who built Sonic for the feature film posted about their work. Naturally, I jumped into their portfolio and immediately recognized one of their early projects: 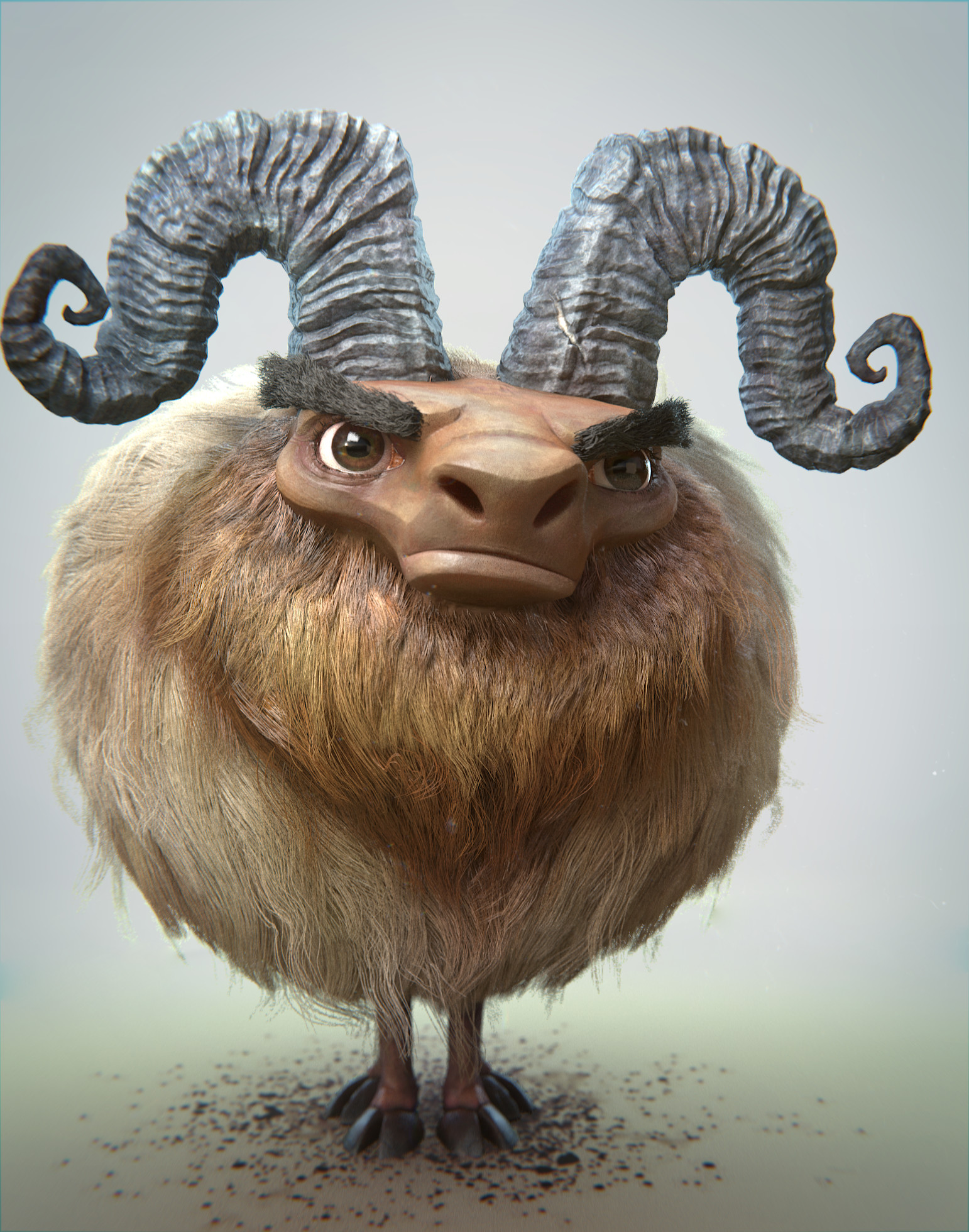 Where had I seen this ram before...was it...YES: Blender Nation! As it turns out, the modeler is / was a Blender artist at some point!

I connected with Alin Bolcas to learn about his journey from discovering 3D via Blender to landing a job at a top VFX studio modeling Sonic the [legendary] Hedgehog.

Stories like Alin's inspired my own dreams of working as a professional 3D artist. If you're an aspiring Blender artist with similar dreams, don't miss this insight.

Was there a certain image / movie / video game / etc that ignited your passion for 3D?

I used to play a bunch of online multiplayer games in my teens and I got fascinated when I found out that I could build characters or even a complete game on my own machine.

How did you begin learning 3D?

I first found out about Blender from a high school friend sometime in 2009. It was my first touch with any kind of 3d software and it became a hobby, I was really hooked! I remember at first I thought it was a 2d software as back in Blender 2.49 you’d start in orthographic top view, it felt like such a breakthrough learning to navigate. It was surely frustrating at first but I was seeing it as a really hard game to play in which I can do and create anything I imagine. Blender Artist forums, Blender Cookie, Blender Guru and YouTube were my best mentors at the time.

At what point did you transition to Maya and why?

I had to switch to Maya when I started university - studied Computer Animation and Visual Effects at Bournemouth University UK. I was super reluctant to switch and even did most of first year assignments in Blender (which I’m glad they allowed). I became less stubborn about it as time passed and tried to make use of my tutor’s knowledge so it turned out to be a natural transition. The fact that most studios I was interested in were using Maya also played a key role.

I often get this question from Blender artists: “Should I learn commercial 3D apps to improve my chances of landing a job?” How would you answer this question?

I think with software it’s always a balancing act between these factors:

It’s always best to go with an open mind. Once you get the hang of one 3D app (especially Blender because you can do so much with it), all other software is basically the same but under a different interface and shortcuts. All it takes is a few weeks to form the muscle memory to become really efficient.

I’d also add that if you can prove with your work that you have an artistic eye and can raise to the quality someone is looking for, no matter the software, you’ll likely have that someone hiring you, assuming they find you of course. Once you get a job, if it’s a studio, you’d have to learn their pipeline and it’d be more convenient for you to learn and use whatever everyone else is using there.

In hindsight, how important was university for your career as a 3D artist?

Throughout university I was a true believer that I didn't need it. After all I was looking up at so many artists who had a successful careers without it. I still think it is not necessary, especially if you are mature and self motivated enough.

For me it was a great stepping stone and awesome to be physically surrounded by people interested in the same thing, growing as part of a community. There's nothing like university life. With all that said, if all you’re out for is information, everything you need is a few clicks away.

How did you transition from university to career?

I was lucky enough to get a summer internship at MPC as a modeler in my second year of study. That was quite eye opening, gaining the experience and being surrounded by professionals really raised my standards. After graduating I had a friend working there who recommended me and that’s how I landed a full-time job.

Saying Sonic the Hedgehog is an “iconic” character is understatement. What was it like to play such a key role in modeling him?

It was like nothing else I’ve experienced before for sure! First, it was the pressure of modeling the first hero character of my career which came out of nowhere because of the urgency of the redesign situation. Then it was the added twist of the character being so well known. I was constantly thinking that there are some huge sonic fans out there who could spot out a fake from a mile away so I tried my best to get very familiar with the original design. Once the proportions and forms were locked we were pretty much set and the rest of the time was spent on technical things: Topology, uvs, facial shapes and maintenance.

With key feature film character models like Sonic, is the responsibility on one main modeler or is it shared by a team?

In this specific case, it was basically only me sculpting/modelling Sonic because, from a model stand point, he is very simple. On something like Godzilla you’d need 2-3 modelers to share the asset. I was constantly guided by my supervisor and helped on very technical matters. Also worth noting, all the props Sonic ever used were in the same character scene but made by other artists in Bangalore.

How many facial blend shapes were in Sonic’s library?

Funny you ask! I used to joke with the rigger that we broke some kind of record. I lost count of the number but we sure went past 100 shapes towards the end of it. It wasn’t that he needed all of them to create the expressions, in fact I remember it was fairly stable with 30 ish shapes. We needed all the other shapes because he was more cartoony and the animators had specific requirements which were difficult to meet in the VFX framework we had the facial rig built. So most of the other shapes were fixing problems when two or more shapes were activated/combined at the same time.

Do you remember the polygon count of Sonic’s final model?

I don’t unfortunately. For the body it’s normally something in the range of 100k polys? He really didn’t need all that to support any kind of surface details as he was basically all covered in fur but we couldn’t go too low either for technical reasons.

Creating art under direction is very different to working on your own projects. Do you have any advice about creating art this way?

I agree, it is different. How I deal with it currently is by trying to do the best work I can on both personal and professional project. I try not to get personally involved in studio work because it's their property. If I ever get frustrated about unfulfilled artistic decisions I let that out through personal work.

How often do you get to inject your own ideas into a design?

With Sonic, I had the chance to work side by side with the art director Tyson Hesse for a week. He had the 2D concept approved and flew to London so we could figure out how best to translate the design into 3D. I tried to be as honest and vocal as I could with what I thought looked good. We’ve used some things and not others but it was an amazing learning experience.

On a more regular basis, modelers are tasked with matching an approved concept piece/reference as closely as possible and the artistic freedom lies in the smaller decisions. The least amount of questions your reference is solving, the more you’ll have to fill in the blanks yourself upon which you’ll receive feedback and iterate on it.

Always remember that it’s ultimately the client’s vision which you have to respect but it’s your personal take on fulfilling that vision.

There’s so many aspiring artists starting their journey the same way you did, aiming to work on major projects as you have. What’s your advice to those artists?

Don’t overthink it. Just create for the sake of creating like you’ve probably done as a little kid with crayons - before you knew what ‘looks good or bad’, before you thought of impressing someone, finding a job, making money, have your name on a big screen, game or whatever. I think that if you manage to find joy in the simple act of doing it, all those will come as you keep practicing and getting better.

To progress faster, aim to do many different projects well instead of stressing over a single ‘perfect’ one which you’ll hate soon after you finish it! When you want to learn something new, start a project that involves the new thing to fill in the knowledge gap through practice and use reference. (it’s no cheat)

Give yourself breaks from the screen to learn about the world, travel, read, exercise, draw, experience things so you can recycle all that information in fueling your creativity. Always look up and try surrounding yourself with who you think are the very best artists in the world while truly believing that you can surpass them.

Lastly, share all the knowledge you accumulate with everyone who will listen along the way. These are some key principles I’ve distilled from everyone I’ve learned so far - wishing you all the best!