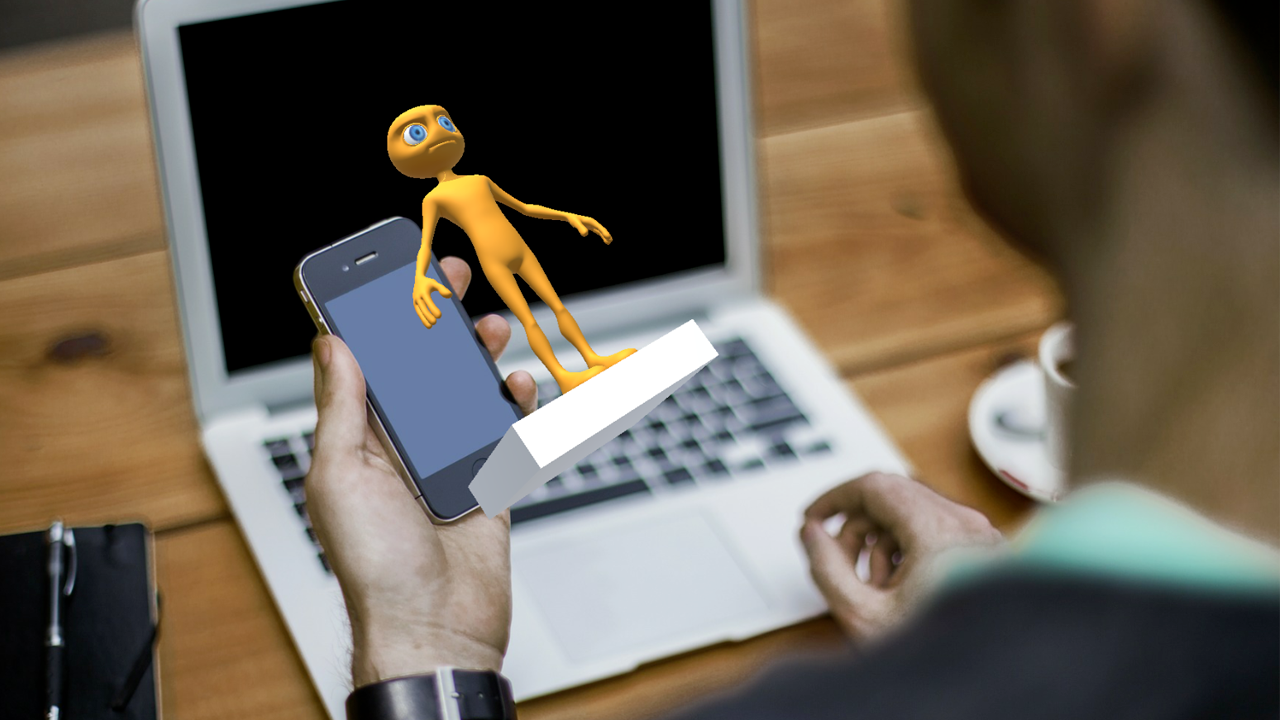 Augmented Reality is a hot new field, and like it's not so distant cousin, Virtual Reality, it also has it's own unique set of guidelines we should try to follow when building AR experiences. AR presents a whole new way of looking at things, literally and figuratively.

I see AR as a window into a completely new environment. One that is not bound by the size of our screen, but rather using that screen as a way to view a much bigger experience.

With AR we have to think about the user experience and how a user will feel when interacting with our AR environment. Will they be frustrated? Amused? Bored? I think we can all agree we want an AR experience that will maker users say "Wow that was great".

There are pitfalls when designing any kind of interactive experience for the public. We can't control how they will ultimately use what we create, but we can make it easier by designing AR experiences that make the process smooth and enjoyable.

Lets discuss the three main areas I believe you should really hone in on for a smooth AR experience: Scale, Interaction, Purpose.

Working in XR (AR and VR) scale is incredibly important. In traditional games that use a flat screen scale is important, but since we can completely control what is seen within that screen it's much easier to give arbitrary scales to objects to fit that screen. Within AR, we are essentially placing 3d or even 2D objects within the real world so these objects should represent a realistic scale. Now we're not talking about creative design here, obviously we could create an AR app that has humans the size of your hand. Instead we're talking about how we use scale properly based on how we expect the app to be used.

When building AR objects such as a vehicle or realistic human character, you want to ensure scale is realistic using real world measurements. An example of this would be creating a car demo that someone may use to determine if they want to buy the actual car. They may take a look at the engine, the interior, even use the actual size of the car to determine if it's too big or too small.

Another example is IKEA Place, which allows users to place realistic furniture from their catalog into their living space to essentially "window shop" for furniture using realistically scaled 3d models of furniture. Things like this are a must when it comes to realistic expectations. If you've never had to work with precise real world measurements this may be a bit of a new way of looking at things. In our latest Augmented Reality course, Augmented Reality Dev Kit we used measurements in Unity to determine precise scale.

Lets take a look at an example of how this would work. Say I want our Baker character to be 6 feet tall. In Unity they use meters, so we can use a game object to act as our "ruler". Since we're only interested in the height of this character, I'll use the Y axis to determine the measurement. Placing our character into the scene directly at 0,0,0 for the X, Y and Z axis which puts him directly in the center of the world. Do the same for the rotation. Here is what he looks like with the defaults in the Transform component: 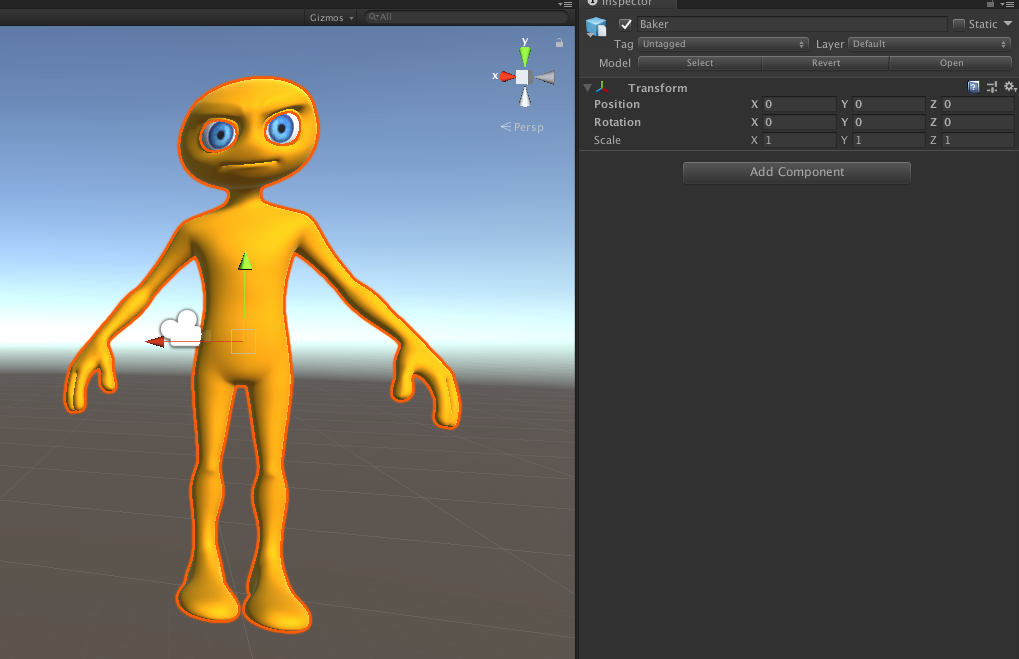 The scale of this object says 1x1x1, which means he's 1 meter tall based off the defaults. Now lets see how tall he really is by default. Create a cube game object, this game object is a good representation of units in Unity as it's exactly 1x1x1, other game objects may differ in default sizes so use a cube to be safe. Placing the cube directly at the same spot as his feet, we can see the baker character is actually much taller than 1 meter in height. 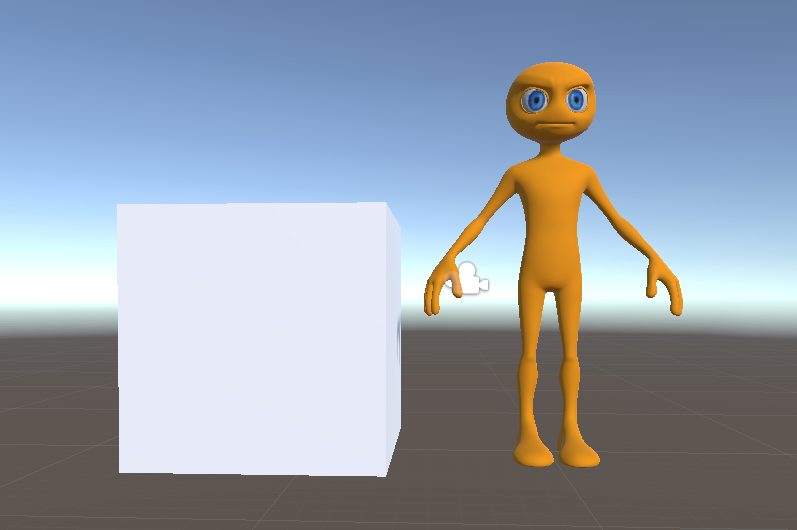 This is due to the differences in scale units used when this object was created in Blender. It's a non-issue since we will be using the cube as a reference of the height but something to be aware of. So we wanted to scale this character to be 6ft tall, since Unity uses meters we need to ensure we convert these measurements. A quick Google conversion shows 6ft is 1.8288 meters

I increased the scale of the cube up to 1.8288 in the Y axis since we're just tracking height. Here we can see the Baker character is nearly 6ft tall by default, we just need to scale him up a bit more to better match: 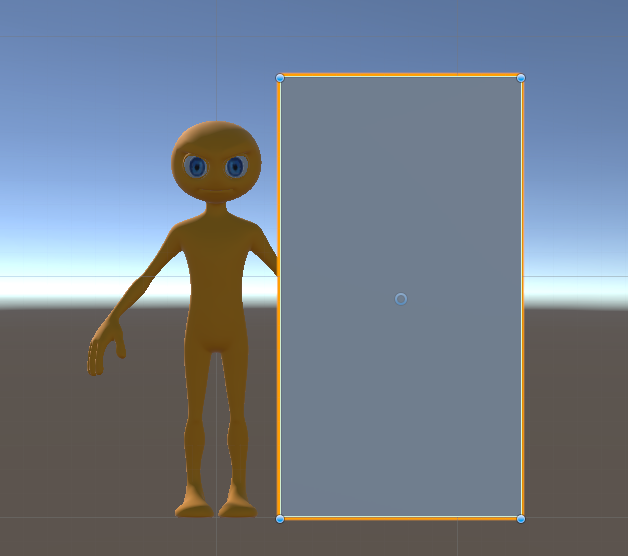 To scale him up I want to ensure I scale uniformly along each axis. While I do want to adjust his height, his width needs to match as well to avoid an elongated character model:

There we go, bumping the scale up to 1.117016 we can see he's now the same height as our cube. Ideally models of this kind would be created in a 3d program with precise real world measurements, but if you're using assets you've acquired elsewhere or want to reuse older assets this is a simple work around.

Unity has a great article on Dealing with Scale in AR in which they talk about using scale in relation to the view of the camera and also scaling object down to the tracked surfaces detected. This could be incredibly useful for improving the overall experience by ensuring that scale doesn't become an issue. Lets take a look at an example given from that article, cameras.

Below you'll see an example of how adjusting the camera's scale can mimic the effect of resizing an object when in reality we're just adjusting the scale of the camera to make it seem so.

With just about every AR experience there will be some sort of interaction, whether that's purely through UI buttons, or by having some sort of unique mix of UI and 3d based mechanics. In either way you always want the interactions to be natural and dependable. Take an example of a product show case. Lets say we wanted to take a look at a vase and inspect it through the AR app.
What would you expect to be able to do instinctively? Naturally you'd want to swipe left and right, up and down to essentially rotate the object to view it from all angles. Having a virtual joystick on screen would feel weird. Same is true for scale. Typically when scaling objects on a mobile device you'll "pinch" the screen in or out to scale it. This is expected behavior and as such you should include it if you allow users to interact with an object in this way.
Pinch to Scale can be used in a variety of ways, but also helps to enhance the general interaction a user might expect. Below you'll see an example of this at work as well.  Too big or too small and it becomes a chore to interact with the object. Here we have pinch to scale with our Baker character:

Another common mechanic is to "pinch and twist" to scale and rotate simultaneously. An example of this would be placing 2D images onto a wall such as graffiti or posters. Here is an example of that at work:

Along with these general interactions you'll want a way to place objects in a scene. We went through this process a few different times in the AR Dev Kit course so I won't repeat the steps used there.
To give the gist of other things you want to keep in mind are things like how users will place objects in your environment. Will this be solely used for vertical tracking? Or could you track vertical and horizontal surfaces?
Try to describe the steps out loud on how you expect the AR interactions to work. Lets say you're building an AR art app that allows users to display various stickers and decals on horizontal and vertical surfaces. The steps for using this app may be:
By explaining the process in this way you may realize there are holes in the way your users will interact with this object. Even within my own description there are things missing. What if I wanted to select a new decal? How can I delete a decal? Not everyone will use your app in the same way, so be clear about how they can use your app.

This last guideline is more about the creative design process than anything. There will inevitably be a ton of AR apps and experiences out there that are cool, but really have no use in AR. It's not to say that you shouldn't make an AR app, but that you should fully embrace the mechanics of AR within your own app. Don't just display objects in AR. While it may look cool, ensure your game is fully suited to take advantage of AR.
Could your product showcase app do just as well in a Web GL or traditional mobile app format? Does using AR greatly enhance the experience? With gaming it becomes a bit different but I would still ask the same questions. Does my game truly feel like an AR experience, or is it a port of a game with an AR skin onto it?
You can also take a whole new spin on a common game or app within AR. Imagine playing a top down shooter where you can get a birds eye view of the environment from wherever you move. An AR fitness app that allows you to place 3d markers in your environment that you can run to.
One of my favorite examples of higher end Augmented Reality is ModiFace. An impressive way of tracking the face and making updates. Kind of like a personal Photoshop for your face.
Get creative with your AR apps. Utilize the real world around you to make your game or app really stand out from the traditional experience.