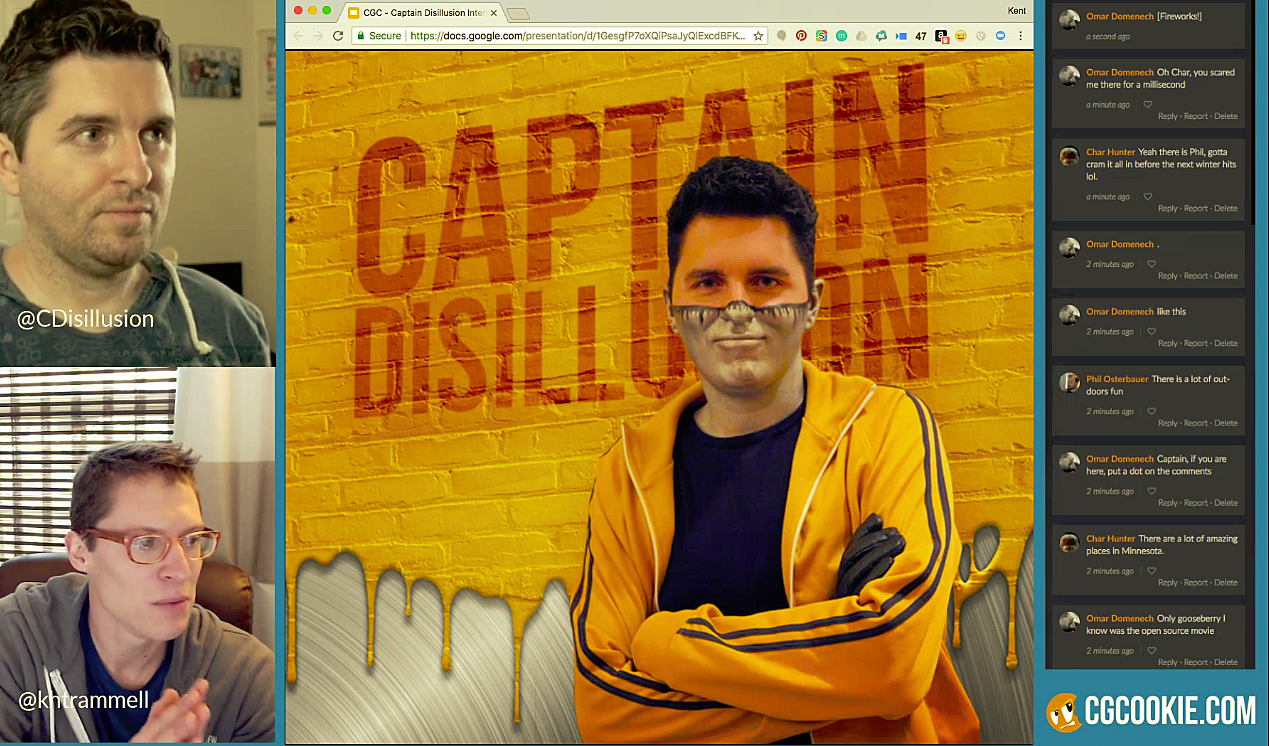 A certified superhero, Captian Disillusion accepted an invite to a livestream with our Kent Trammell. This article is a part of the stream, but make sure to check out the video to catch all that was discussed about illusion, silver makeup, and - of course - Blender.

Alan, have you always been a skeptical person?

I was always artsy and creative. Growing up, my parents were circus performers and I was around magicians and illusionists a lot and it always fascinated me to see through their tricks.

But back then, I didn't know that there was a such a thing as a community of skeptics and I was only introduced to the concept of critical thinking later on, even though I unconsciously cultivated it from an early age.

Later on, learning the tools of storytelling scratched an itch for me to get into detail and figure out how things work behind the scenes. It also appealed to my technical side. As I was making my videos I discovered that there is actually a community of skeptics.

With over 1.5 million followers on YouTube, would you say all of these people are skeptics, too?

Obviously, they are not a homogenous group. I make videos that anybody can watch and I guess that my followers are mostly "normies" who don't do effects and aren't professional artists. I wouldn't say they necessarily consider themselves skeptics, but they enjoy seeing VFX and going beyond the surface, demystifying what really goes on, same as I do.

Ultimately, I want to draw people in and make them interested in visual effects and animation as well as critical thinking.

In the era of fake news, do you think people are more skeptical than ever?

I've definitely seen a shift in people's perceptions; they are not as gullible as they used to be and they have gotten good at spotting fakes.

It's almost swung the other way where people are becoming too suspicious. I've ended up making a few videos explaining that some things are, indeed, real and it's OK to feel safe believing them, for example when you watch videos of people juggling or showing off an extraordinary skill. Not everything out there is fake!

How long did you have to hustle on your channel before it started to take off?

I'm not an overnight sensation by any means; the channel took a long time to grow, especially since there have been a couple of years where I did one video per year.

It was around 2015 when I sat down and decided to take things more seriously, like firing up my Patreon and committing to doing one video per month.

Captian Disillusion has become my full-time gig in the past two years. I was working as a video editor previously and the job was gradually becoming less demanding as my YouTube channel was taking off, so it was a smooth transition into focusing on the Captain. So far, so good!

Initially, I wanted to be a movie director and before that, I wanted to be an animator but at the last moment decided to be a film major. I wanted to learn filmmaking and how to work with other people, so I studied film production. I came straight out of that into freelancing, doing whatever was needed, from shooting to editing. I tried to become an expert in everything and I'm still using a lot of those skills today.

Before becoming a full-time YouTuber I worked at a company that produced a web series for teenagers.

Do you ever get recognized in public?

A barista in my local Starbucks asked me one day, "Are you Captain Disillusion?" which felt pretty weird, but mostly that doesn't happen. I'm not a massive YouTuber by any standards and I think my audience is pretty niche - yes, we are all nerds here!

At skepticism-related conferences I go to, people do approach me. It feels like being in an alternative universe where I'm an A-lister. It's very pleasant, but I don't need that in my other reality.

Do you do your own facepaint?

Yes, I do it all myself! I'm a control freak, after all. I got the process down to under 20 minutes. Funny thing, the transition is really a result of me messing it up and going along with it for convenience.

I've had the same look for a decade now and it's basically a result of me looking for a crazy, sci-fi inspired look.

You have your own brand of sarcastic humor. Does your audience ever get offended?

Oh yeah, some people get offended on behalf of other entities that I make fun of. But that's just me, I tend not to take things too seriously. I want everybody to have a good time and there is nothing mean in my comments.

How do you deal with the pressure to create more and more content?

I do find it hard to keep consistency sometimes. In some behind-the-scenes aspects, the production has gotten more complicated so I'm learning to delegate some things.

I certainly hope that I'm equipped to avoid burnout. At the same time, I definitely have the feeling "This could go away at any time" and you have to be mindful of the future.

After doing the same things for over 10 years, do you get bored with it?

No, but I do find it challenging sometimes to come up with new stories. I'm really making a series with the same character and I have to think of new plots and situations. It's happened to me that I've made jokes or presented ideas and then I realize I had actually already done those previously!

I do want to work on other side projects which might have nothing to do with explaining visual effects but at the same time, the reason people come to my channel is to see Captain Disillusion doing his thing.

What is your timeline for producing videos?

The idea is always to get it done in a month. For some of the videos, I spend up to two weeks figuring out the script. I would be sitting down at home or at Starbucks, typing out the script of how the story is going to evolve.

Then I pick a few days and do the actual filming, I always take a ton of takes. My videos might be two minutes long, but I shoot probably four hours worth of material.

I spend about a day getting the material into the computer and then I build the rough cut, getting the video into the stage of where it's edited. I load that into AfterEffects and then spend every waking moment fine-tuning the effects. There is no moment in my videos where there isn't some AfterEffects treatment, like at least a slight readjustment to a camera shot.

I grade the raw footage with DaVinci Resolve to make the live-action look good. At the last moment, I do the audio treatment in ProTools and at the end of all this, I upload it to YouTube.

Generally, I'm taking it easy in the first half of the month and basically dying in the second half.

Which part of your video production workflow do you like the most?

How has your approach to the production of your videos developed?

I think my first videos were terrible and I find it hard watching my own stuff. All I see are the mistakes! In the early days, I would have my dad grab the camera and film me. At the same time, I do think that my early videos were better than what was on YouTube back in the day - of course, now, the quality of overall YouTube videos is on another level than ten years ago.

When I first started, I was fresh out of film school and I wanted to create a finished piece of something without necessarily engaging with the YouTube culture. Only years later did I start doing that and interacting with the community.

How do you overcome the perfectionist trap and just get things done?

A self-imposed deadline is what did it for me. If I have an open-ended project, I will just not get anything done. I'm not a workaholic by any means and I'd always rather be doing nothing, but putting a date on projects is what drives me.

I made a promise on Patreon to my supporters and I will always keep it, no matter what. This is what gives me my internal motivation.

You've released a couple of Blender tutorials, too.

Correct. It's a reward I offer on Patreon and I ended up releasing one of them publically. I watch so many Blender tutorials, CG Cookie's included, and Blender is just so much fun to talk about! Showing off on Blender is immensely enjoyable to me. I must have impersonated you [Kent Trammell] because I've watched you so much, so I internalized a lot of your explanations and teaching style.

I don't consider myself a Blender expert, but I don't think you need to be one to make a good tutorial. As long as you are presenting correct information in an understandable way, it's alright if you've only used the workflow once before. Having healthy confidence is a big part of the game.

Is there anything that you feel Blender tutorials miss out on?

With Blender, as a tutorial consumer, I haven't seen a lot of in-depth explanations of the non-3D parts. I've seen some on compositing nodes, but the workflow around VSE isn't often addressed. You can never have too many workflow tutorials, either, showing people how to set up your project, arrange your folders, fitting things into the big picture of producing an animation. The CG Cookie course about Pierro is an exception: it goes from the start to the end and it's amazing.

I think there could be more tutorials about not modeling, not animation, but everything else. I think we all want Blender to be a well-rounded tool, so the tutorials should cover that.

Is there a video you've given up on because the CGI was too difficult?

I've postponed things, but I've never started a video and bailed on it completely. I do bail on ideas sometimes when I don't feel confident enough about a topic. But if I shoot something and actually start the meat-and-potatoes work on it, I will always complete it. It's better to just wrap it up and get it out there than be a perfectionist and sit on it forever. At the end of the day, your audience will appreciate it. You know, things are better off existing.

To hear all the questions & answers and see well the Cap did in a "Blender insider" test, watch the full livestream.