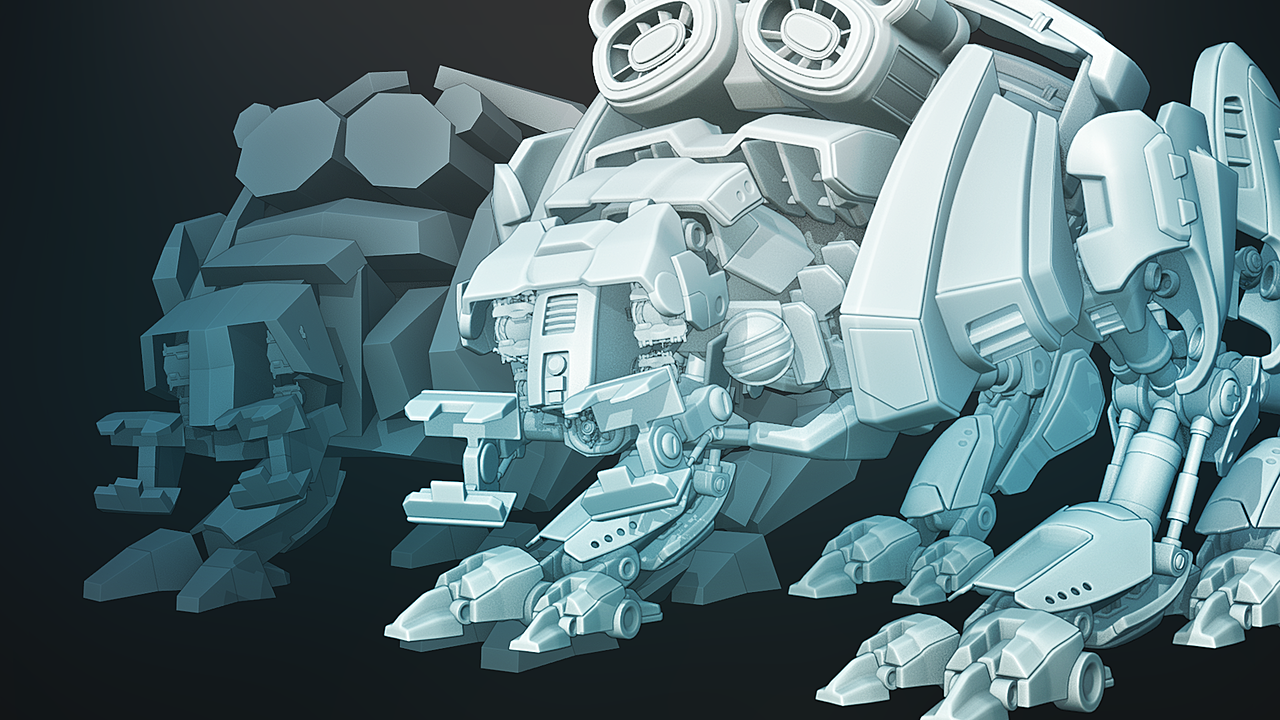 3D Modeling is not easy. You’ve probably heard of a lot of rules, best practices, and exceptions to those rules. It’s easy to get caught up in the nuances of tools or topology and miss the metaphorical forest for the trees. Thankfully, there are a few key concepts that apply to any project and will instantly improve your results. Keep in mind that while my main focus is on Blender, these rules are universal to any 3D software.

The first thing that you want to think about when modeling in Blender is the overall shape of what you want to create. This might seem obvious, but it’s the most important yet also the most tricky part to get right. Maybe it’s the ears on a character or a piece of a sports car - there are just some shapes that are hard to put together. The thing to keep in mind when dealing with those is that complex shapes are always just a combination of simple shapes.

Any form in Blender can be made up of simple adjustments to cubes, spheres, and the other primitives. You don’t always have to block out your model first, but doing so may help you get unstuck. Even if the primitive blockout is unusable in final production, it will help you understand the underlying structure of what you’re making. 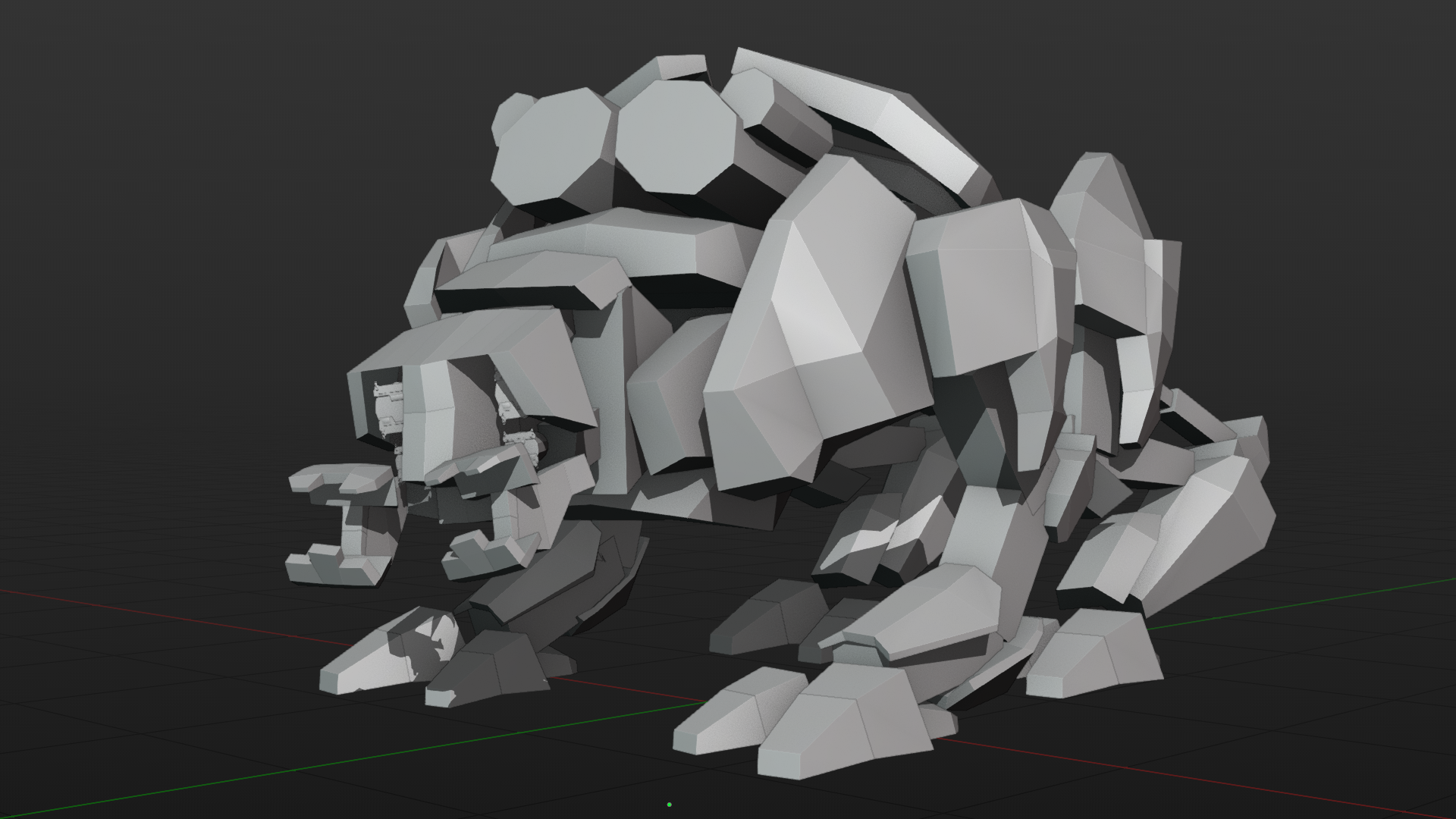 Next, identify the most defining features and outline those first. That will allow you to easily tweak the form to get it just right before you have too much geometry and it becomes difficult to manage.

Use a reference to check your angles, proportions, and curvature as you go. Be sure not to rely too much on modeling sheets, because what can happen is that we can focus too much on the front, side, and top views and not notice issues that are only visible at other angles. If you find that your features are too angular or that things just don’t look right when you pop out of orthographic view, it’s time to turn off the modeling sheets or move them to the side and work while rotating around in perspective.

If you start with very little detail and only move on when that simple shape looks as good as it can get from all angles, you’ll avoid SO many pitfalls later on. Whether you’re sculpting or poly modeling, not being impatient with the process will help your models to turn out clean, crisp, and well defined. If your Blender models are always coming out a little lumpy, it’s likely that you’re adding too much geometry too quickly.

So you’ve got the overall form down and now you’re ready to really push your object to the next level. When it comes to detail in Blender modeling, it’s important to know exactly how much and what kind to make. Whether you’re modeling for a mobile phone game, desktop game engine, or for a short film that will take hours to render makes a huge difference in what you can model.

Even if you do have an unlimited rendering budget though, it’s important to understand levels of detail. 3D artist Neil Blevens has a legendary blog post where he talks about primary, secondary, and tertiary shapes. You want a good mix between areas of big detail, areas of medium detail, and areas of small detail. 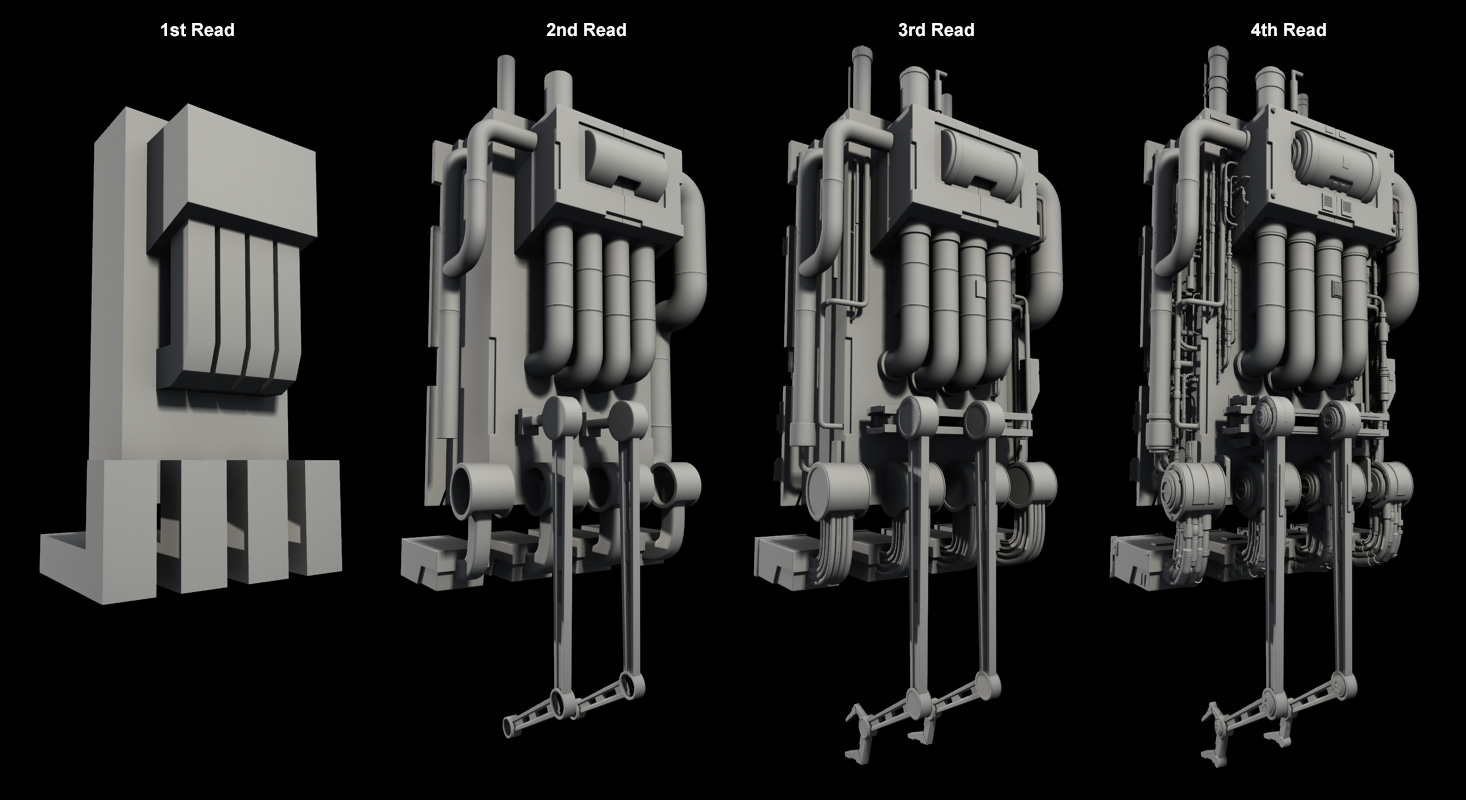 Work in passes. Make all of the big things first, then all of the medium things, then the small things. Don’t jump right from big to small or spend too much time focusing on any one area at a time. Once you’ve hit your polygon limit, if you have one, use textures to add the smaller details that you’re not able to model.

3. Use Real-World Scale and Reference

Try to model to real-world scale whenever possible. The size of your model makes a lot of subtle differences, from how the lights in your scene behave to how simulations will interact. Most importantly though, it forces you to be consistent. Exporting to other programs, adding procedural textures, adding bevels, or appending objects from another project will all just work as you would expect.

The second thing about the principle of scale is the proportion. This is the #1 mistake I see Blender artists make (including myself). Things being the wrong size in relation to other things. Whether that’s a door that no human could fit through or a chair that has armrests all the way up to someone's chest, incorrect proportions are everywhere in CG.

What’s a bit more subtle is the thickness of objects and the amount of bevel. Say you model a table in Blender that’s exactly to real-world dimensions, but the legs are a little too thick and have a bit too much chamfering going on. Even though the table is technically the right size, it’s going to look too small and just feel off. 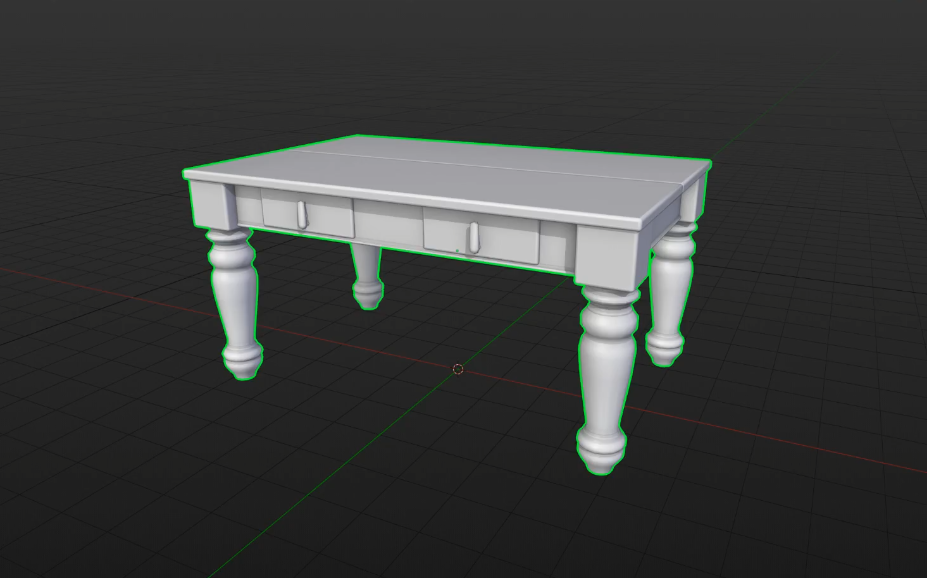 The antidote to this is to use a reference! Double check the length, width, and height, as well as the thickness of the individual pieces that make up the object. If you’ve just been eyeballing it up to now, I guarantee that you’ll be surprised by how much difference there can be between what we think something looks like and what it actually is.

Survival of the fittest. Ok, not really, I just mean that Blender objects and meshes should be as easy to modify as possible. You may have heard of the term non-destructive modeling, and that just means modeling in such a way as to keep things as easily changeable as possible. This usually entails keeping the mesh really simple and using modifiers to add complexity. That way, a few quick tweaks are all you need instead of every little change becoming a huge hassle.

The second part of keeping something changeable is making sure that it can easily change over time when animated. This could mean keeping your local orientation in line with the object so that it’s easy to place in awkward situations or making sure that your topology (how the mesh components fit together) allows the object to keep its form when bent or stretched with a rig.

In short, your mesh needs to be easily adaptable to design changes and animation.

Modeling in Blender is awesome, but I don’t think anyone enjoys doing the same work twice - so we’re definitely not going to like doing it 300 times. To save time, reuse as much of your mesh as you can. This can mean using a mirror or array modifier, using Alt+D instead of Shift+D to make an instance instead of a duplicate, or duplicating and altering an existing object instead of starting from scratch.

If you don’t want things to look obviously the same, try varying the size, rotation, modifiers, or material properties. It’s a simple concept, but It’ll allow you to make things that look really detailed and you only need to do a fraction of the work. 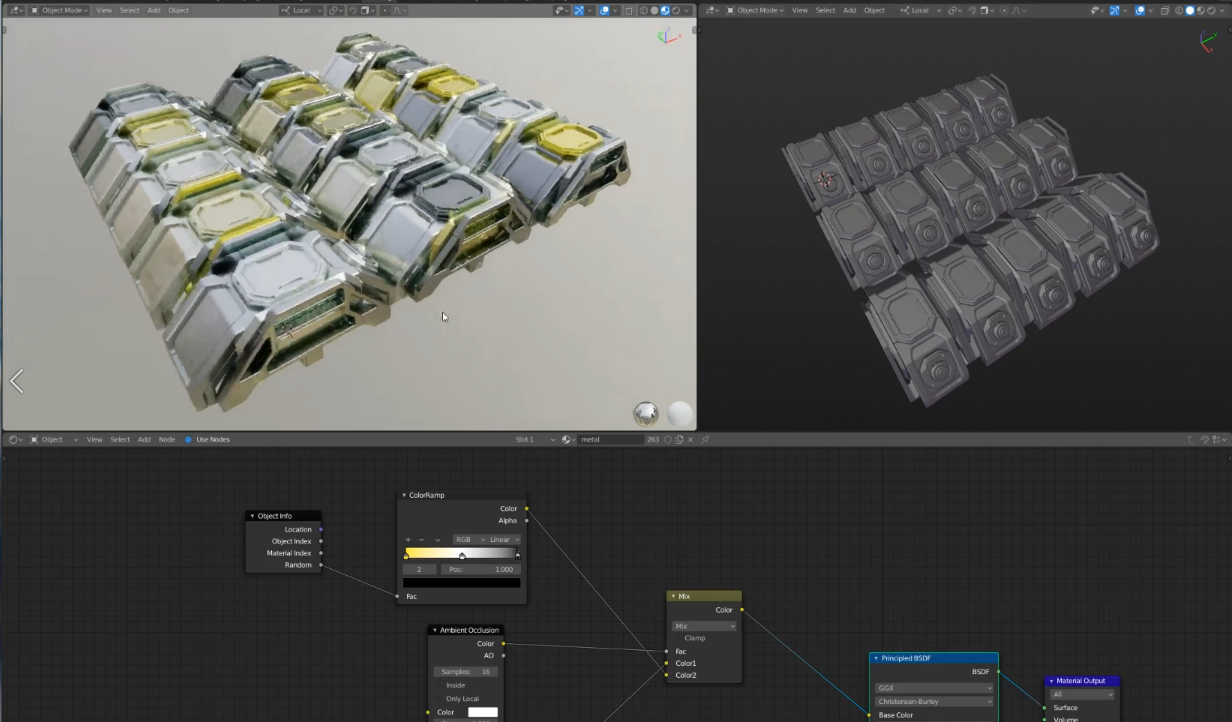 This is how your Blender object looks when rendered. Because of the way rendering works, how you model your object majorly impacts how light interacts with its surface. Be on the lookout for bumps, pinches, and warped areas. These are signs that your topology isn’t supporting the form of your object.

When subdivision surface modeling, use a loop of quads around any sharp edges or important details. Only use N-gons on flat shaded surfaces, avoid triangles at first until you have a good reason for them to be there, make sure your normals are pointing in the correct direction, and be really careful where you place poles (vertices with five or more connecting edges). 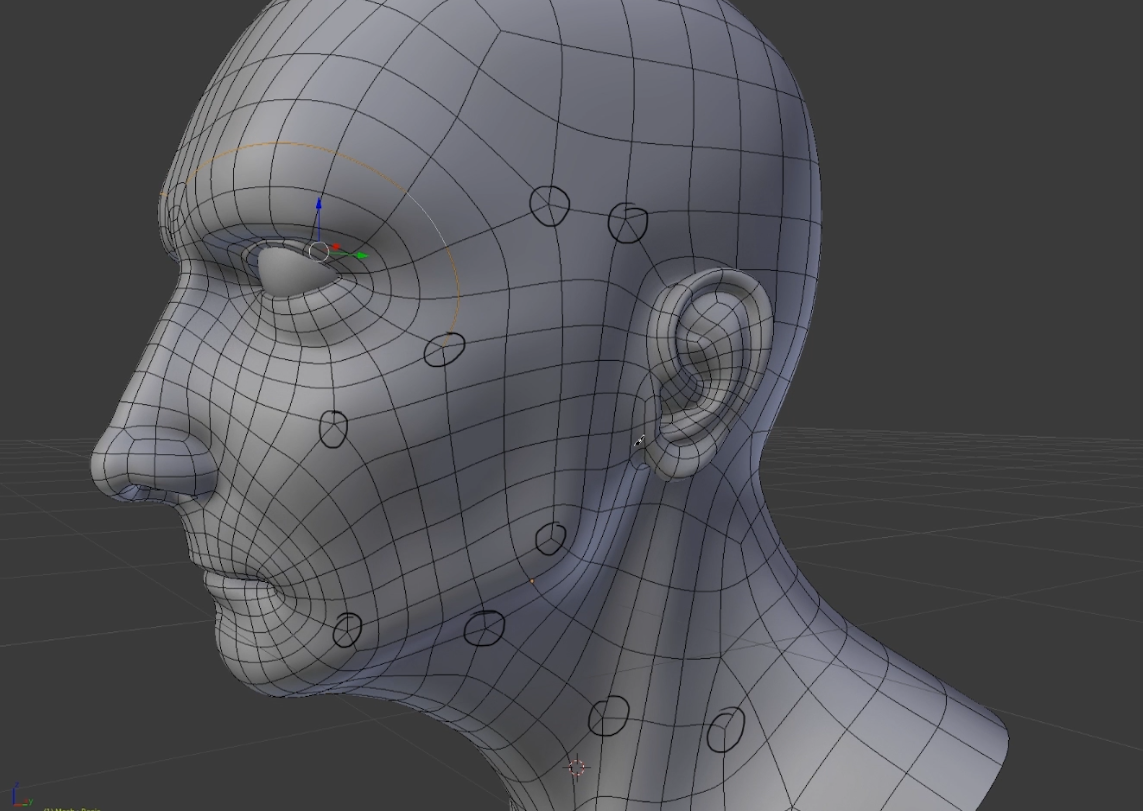 If you’re not familiar with those topics or skeptical as to why those are good rules of thumb, I have a super thorough Blender course all about topology called the Mesh Modeling Bootcamp, where I run through a ton of examples and explain all the most important modeling practices step by step.

Keep These 6 Principles in Mind for Any Blender Project

Whether you’re a beginner or a pro, keeping these six principles in mind when modeling (form, detail, scale, adaptation, reuse, and surface quality) will help you to improve your work and avoid some of the headaches that that can typically happen when modeling something new.